LOS ANGELES – October 12, 2021 – Carroll Shelby International (CSBI:PK) honored Ken Miles with the prestigious “Carroll Shelby Spirit” award at the Team Shelby Bash on September 25, 2021, in Las Vegas. Ken Miles’ son, Peter Miles, accepted the award on his father’s behalf. The award was originally scheduled to be presented during the 2020 Team Shelby Bash, but was delayed due to the pandemic. 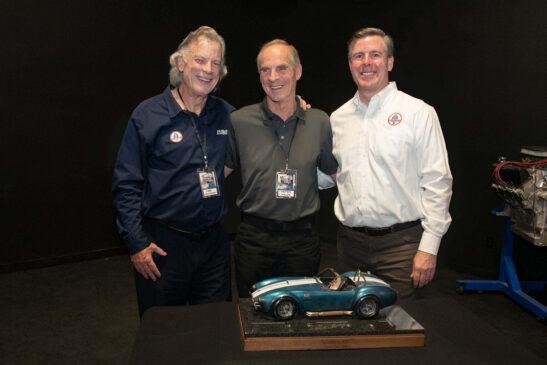 “Ken Miles was one of the most influential individuals of the golden age of sports car racing,” said Aaron Shelby, Board Member of Carroll Shelby International. “Ken was truly a renaissance man with spectacular driving skills, brilliant mechanical abilities and an organizational genius. Many today recognize him from the film ‘Ford v Ferrari’ and his association with my grandfather, Carroll Shelby. His intensity and focus carried him and Shelby American into the winner’s circle and racing immortality.”

Born in Sutton Coldfield, England, Miles’ passion for speed manifested at an early age. By the time he was fifteen years old, he was racing an Austin 7 Special to great success.

After moving to the U.S. in 1951, he raced in a series of modified MGs. His many victories led to a stint driving a Porsche for John Von Neumann’s Porsche-VW distributorship, winning first overall 16 times.

Eventually Miles decided to open his own shop, Ken Miles Limited. Unfortunately, he was a better driver and mechanic than a businessman. One day his employees came to work to find that the IRS had closed the shop.

“That’s when Carroll Shelby asked Miles to be his Competition Manager,” said Joe Conway, Co-CEO of Carroll Shelby International and CEO of Shelby American. “Until then, Shelby Cobras had little racing success. With Miles doing the preparation, they began to dominate. Ken went on to compete in more races for Shelby than anyone, earning him the best record.”

Miles also championed the radical Shelby Cobra Daytona Coupe, helping engineer and test it. His support convinced the Shelby team to back the car, which made America a sports car world champion.

Carroll Shelby once said, “Ken was unique…he was the heart and soul of our testing program. He made the Daytona Coupe work. Ken was a world-class driver. He was also helpful to the other drivers on my team.”

In 1965, Henry Ford II asked Shelby American to campaign GT40s. In addition, Miles was a key contributor to the 1965 big block Shelby Cobra and was a development driver for the new Ford Mustang-based Shelby G.T.350.

“1966 was a fateful year for Shelby and Miles, filled with their greatest triumphs and unspeakable tragedy,” said Neil Cummings, Co-CEO of Carroll Shelby International and CEO of Carroll Shelby Licensing. “It was Miles’ last season, and it was the season of his greatness.”

The biggest race of the year was at Le Mans, where Ferrari had dominated. The titanic struggle included three Ford GT40’s and a full complement of cars from Scuderia Ferrari. The top Ferrari entries began to retire due to accidents and mechanical failures. Miles, with co-driver Denny Hulme, was leading with the Bruce McLaren/Chris Amon car second and a third GT40, driven by Ronnie Bucknum and Dick Hutcherson, in third.

The drivers were asked by an executive to finish in a dead heat for PR purposes. After receiving the instructions, Miles slowed down for the others to catch up. The Shelby team thought that Miles was a lap up, so even if the cars bunched, his car would win. The race sanctioning body stated that the cars were on the same lap and when the GT40s flashed across the finish line, official results showed that #2 car of McLaren/Amon had won. Though disappointed, Miles seemed resigned to accepting the unacceptable French decision.

A few months later, Miles was testing an evolution of the GT40 called the “J” car at Riverside. On August 18, 1966, Miles’ car went off the bank and he tragically died.

“If a single dominating motorsports figure had to be chosen from the 1950s and 1960s, it would be Ken Miles,” said Aaron Shelby. “He brought the European concept of sports car racing, club organization and road racecar construction to America. That he could design, build and drive a vehicle to unbelievable speeds made him extraordinary. He’s remembered for his tenacity, grit and exceptional skill. He is forever a champion in our hearts.”

The “Carroll Shelby Spirit” award was created to kindle a desire for excellence by recognizing people who demonstrate great character, exuberance and tenacity. The award is a stunning bronze statue of a Shelby Cobra designed by Rick Hadley. Other award recipients over the years include Bob Bondurant, Allen Grant, Edsel B. Ford II, Parnelli Jones, Dan Gurney and 2021 recipient Jim Farley.

The statements contained in this press release that are not purely historical, including statements regarding the Company’s expectations, hopes, beliefs, intentions, or strategies regarding the future, are forward-looking statements within the meaning of Section 27A of the Securities Act of 1933, as amended, and Section 21E of the Securities Exchange Act of 1934, as amended.  Actual results may differ materially from those expected because of various known and unknown risks and uncertainties, including, but not limited to, the continuing effects of the U.S. recession and global credit environment, other changes in general economic and industry conditions, the award or loss of significant client assignments, timing of contracts, recruiting and new business solicitation efforts, currency fluctuations, and other factors affecting the financial health of our clients. These and other risks are described in the Company’s most recent annual report on Form 10-K and subsequent reports filed with or furnished to the U.S. Securities and Exchange Commission. The forward-looking statements included in this press release are based on information available to the Company on the date hereof, and the Company assumes no obligation to update any such forward-looking statements.

Auto manufacturer and entrepreneur Carroll Shelby is one of the most famous and successful high performance visionaries in the world. A pioneer for modern automotive licensing programs, he began licensing his name and designs for various products beginning in the 1960s. He founded Carroll Shelby Licensing Inc., which is the exclusive holder of trademarks and vehicle design rights for some of the most famous muscle cars and high-performance vehicles. CSL also holds trademark rights for Shelby-branded apparel, accessories and collectibles. For more information about the company or licensing opportunities, call (310) 914-1843, fax (310) 538-8189 or write CSL at 19021 S Figueroa St., Gardena, CA 90248, or visit https://www.shelby.com/carrollshelbylicensing.

Team Shelby was founded in 2008 by Carroll Shelby to give people an opportunity to enjoy their cars with fellow enthusiasts. Ownership of a Shelby vehicle is not required, only a passion for the brand and lifestyle. With chapters worldwide, the factory sanctioned club provides benefits including exclusive access to “Members Only” areas of the club website (http://www.teamshelby.com), official Team Shelby Membership Kit, invitations to special events and monthly discounts on Shelby products.