You couldn’t have asked for a better way to start the season at Mahoning Valley Speedway with an incredible Modified finish that was decided by a whisker by two drivers who came from deep in the pack as 13th starting Matt Hirschman nipped Austin Beers, who drove to the lead from 16th on the grid, for the win in the opening round of the John Blewett Inc., Mahoning Valley Speedway Hall of Fame Series Bill Teel Tribute, equally exiting action in the support classes, a sun splashed afternoon and a five division program that was in the books in just a bit over four hours.

And, for Hirschman, he may have chocked another victory at the paved quarter mile oval – his fifth in a row and 23rd overall – but it was by far one of the most hard-earned yet.

After a revenge draw, Hirschman used every bit of talent he had to execute his drive to victory as he was placed to the back after getting caught up in a lap seven dust up, then methodically picked his way back with savvy driving and the help of a sprinkling of cautions. Within the final half dozen laps he was able to move past Zane Zeiner and Jack Ely leaving only Beers to contend with which immediately began a fierce side-by-side duel.

Beers would actually catch a break with three laps to go when a caution flew and the ensuing restart would go single file, however, Hirschman went right back at it and as the white flag waved it was a hard charging battle to the end. The pair where dead even as they rolled out of turn four and when they crossed the finish line it was determined that Hirschman was barely ahead to claim the verdict. 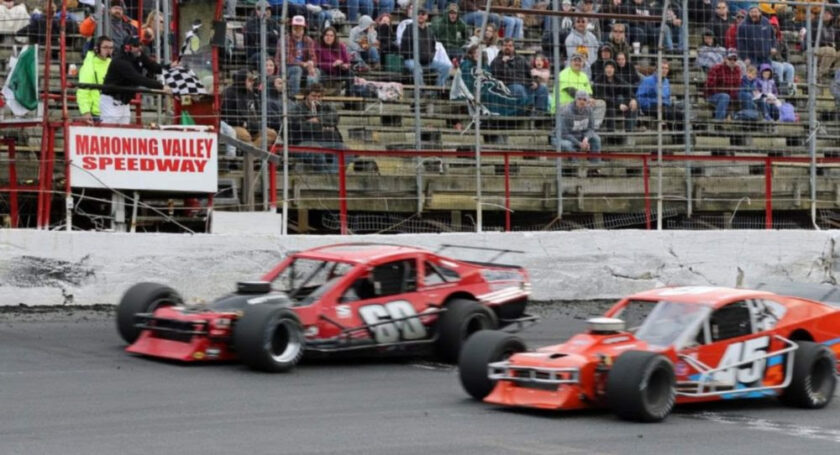 “That was a hell of finish and I’ve been a part of some amazing last lap finishes this year and we keep coming out on top and it’s an awesome way to win a race but it also stinks to lose a race that way too,” expressed Hirschman.

“The fans were certainly treated to a great finish whether they were cheering for us or Austin (Beers), they got a great race and at the end of the day that’s what you come to see,” he continued.

“We actually got handicapped twice between the redraw and then getting spun near the start but you never give up and that’s always been my motto, never give up until the checkered flag falls.”

The thrilling finish between Hirschman and Beers was only part of the story. At the outset Nevin George overtook pole sitter Ely for the early lead but then gave way to Zeiner after a lap-12 restart. Bobby Jones was then glued to Zeiner’s rear bumper with George just as close.

Zeiner and Jones continued on one-two until Ely found a burst to get by Jones with 39 laps in and the next time around did the same to Zeiner. Following Ely was his teammate Beers who wasted little time in taking the DeLange Racing No. 45 to the front as the field recorded 43 laps.

It was evident to both Beers and Ely that Hirschman was on their heels and they worked there best to keep him at bay. But after Hirschman passed Ely the stage was set to the thrilling run to the checkers.

“The laps where ticking off and once it got past 50 I was thinking ‘Man 14 laps and we’re in sixth spot and we have to do something quick.’ Then things started to open up and we made some good passes,” explained Hirschman.

“People may not like that we’re winning and our success but there isn’t one guy at this race track that can be mad about me today and the way I raced them and it was a good entertaining finish and you’re going to leave here talking about this finish for a long time.”

For the second time in as many races Beers finished second to Hirschman at Mahoning. They closed out 2020 in the same order and a number of times prior to this race as well.

“It was very tough to swallow this one but I’m sure it was a great show for the fans, what a race. It was an honor to race in the memory of Bill Teel,” said Beers.

“Our right rear (tire) went around lap 45 so that didn’t help but honestly to finish second to Matt (Hirschman), it’s hard to swallow because it’s happened now several times but I think we’re going to get him soon.”

In the Street Stock main it was Randy Ahner Jr., scoring a solid win over Mark Deysher for his 23rd career class victory. Ahner took the lead with eight laps to go after passing impressive rookie Jacob Christman.

Christman, who was in his very first stock car race, picked the pole and when the green flag dropped exhibited no indication of this being his solo outing as he was holding back one of the premier veterans in Todd Ahner and doing so with self-confidence and just plan good driving.

On a lap 20 restart Christman was still leading while R. Ahner overhauled T. Ahner for second. The upstart was still maintaining his lead nonetheless, running a good line that enabled him to hold off the charge of R. Ahner.

However, a power steering hose let go and made it problematic for him to uphold his spot, as R. Ahner would step to the outside of Christman and complete the race winning pass as 22 laps went into the books.

Unfortunately for Christman, his noteworthy debut ended three laps short as the culprit steering hose would be his demise.

Reigning and two-time Hobby Stock champion Al Arthofer came out firing on all cylinders as he cruised to the Opening Day victory.

Arthofer, who started seventh, zipped by early leader Ryan Berger on lap 14 of 25. From there on the throttled down and continued to distance himself from the pack, ultimately taking a nearly two second margin of victory over Berger.

While Arthofer was pulling away Trisha Connolly and Justin Merkel ran under a blanket with Berger and would cross the finish line in the order. Cody Boehm held off his brother Jacob Boehm to compete the top five.