Ferrucci made his Xfinity Series debut last weekend at Homestead-Miami (Fla.) Speedway and while he made quick progress on the track in the early laps of Stage 1, the rookie driver got a rude awakening to racing stock cars in the high lane at the demanding 1.5-mile track where caressing the high line sucked his No. 26 Toyota Camry into the wall, cutting a tire and erasing them from competition.

No harm no foul though.

It wasn’t about finishing inside the top-10 or even managing a top-20 finish in the hot South Florida sun, the debut was focused on getting Ferrucci comfortable and making laps and preparing him for a stretch of five consecutive race tracks where different disciplines would be required over the next six weeks.

Taking home, a 30th place finish, two laps in the arrears to winner Myatt Snider wasn’t ideal, but the performance was enough to give Ferrucci, crew chief Andrew Abbott and veteran spotter Chris Lambert a plan moving forward to Vegas.

Starting 23rd in his Las Vegas debut, Ferrucci would take the opening stages of the race to find his balance and his comfort zone at the multi-grooved race track.

Finishing inside the top-20 at the end of Stage 1, Ferrucci was able to give confident feedback to Abbott about what he needed to make his car better for Stage 2.

Throughout the second stage, Ferrucci would find himself more comfortable on the track and continuing to climb through the field and reached 16th by the end of Stage 2 and was hungry for more of the same adjustments to set the tone for the run to the finish.

Continuing to progress through the field during Stage 3, Ferrucci was catching the attention of his peers around battling with the likes of Brandon Brown, Justin Allgaier, Tyler Reddick, Josh Williams and Jeremy Clements.

His constant push to get him self inside the top-15 was evident in the latter stages of Stage 3 when Lambert informed his drivers that not only were his lap times inside the top-10 but even at times faster than leaders AJ Allmendinger and Daniel Hemric.

Ferrucci maintained a pace on the lead lap, but when green flag pit stops began with 55 laps to go, Ferrucci would eventually fall of the lead lap following their final pit stop – but luckily a caution waved with less than 50 laps to go which put the Sam Hunt Racing team back on the lead lap and in contention to chase a top-10 finish.

Another late race accident allowed Ferrucci to pit for four tires, fuel and allowed Abbott to make an adjustment for the car getting looser as the lights turned on in the Nevada desert.

On the restart, Ferrucci was comfortably inside the top-15 and spent the last several laps battling door to door with Justin Allgaier edging the JR Motorsports driver at the checkered flag by two-tenths to finish a commendable 13th.

“Oh man, from when the green flag dropped, I felt really confident,” said Ferrucci after the race. “It’s been one of those things where Toyota has been a big help, putting me on the simulator. We just got really free right off the get-go, so I just tried to hang on to it in Stage 1.

“In Stage 2, Andrew took about six rounds of wedge out of our Supra and it lit it up. I was really happy with the balance the rest of the night. After that I think it was one more turn of wedge and a small tire adjustment and dude we went racing. Just being able to race at the end there with Justin (Allgaier) – he’s a really good friend of mine – it was just so awesome. “

Finishing 17 positions better than he did at Homestead, Ferrucci said it was important to recover from Homestead and keep pedaling his SHR team in the right direction.

“I felt like I owed it to the team and crew and Toyota (after Homestead),” he said. “They gave us a heck of a race car (today). Our Supra was so fast in Homestead and I was just so upset I got into the wall. Being a rookie it’s just so hard, so coming here I just wanted to keep my head cool.

“We did that. We stayed patient. We got through Stage 1, adjusted the car and came out swinging at the end.”

Ferrucci described how the communication changed for the better between himself, Abbot and Lambert from just one week prior.

“Working with Andrew (Abbott) is definitely different,” he said. “Even Chris Lambert up in the sky (spotter), having those two people going back and forth. After Homestead everything was so new I kind of got flustered with how the strategies worked. 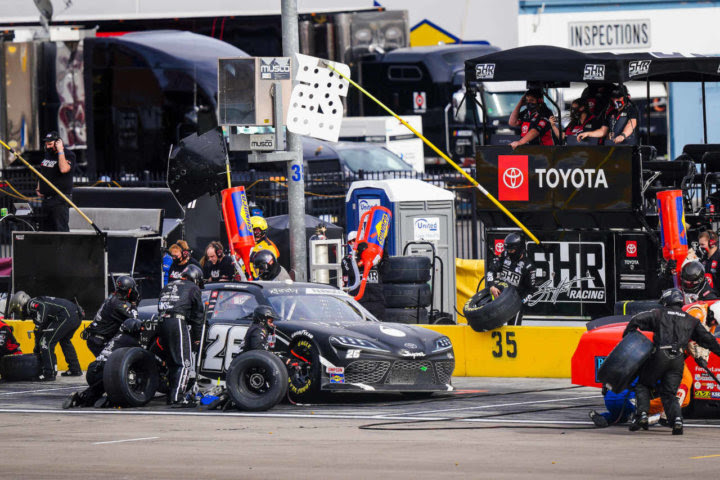 “We went back and changed the way we communicate to add more information for me and when we showed up this weekend, that was the whole goal. These guys definitely showed we can be a top running team with a small crew.”

What made Ferrucci’s progression and performance on Saturday so dynamic was that he was accelerating forward without the benefit of practice and qualifying because of COVID-19 protocols.

And while some may think Ferrucci would want the extra track time, he’s perfectly fine with the current format.

“I’m not going to lie – I kind of like it,” he said. “It’s like such an adrenaline rush to just show up and take the green flag. I mean, it’s one of those things, it’s probably the first time ever and maybe the last time in my life that I’ll get to show up and do something completely new and go at it green.

“I am just trying to love and take in every moment. I think the crew is as well. It’s definitely not getting old. “

The transition from IndyCars to stock cars has certainly been customary and a tough learning curve, but Ferrucci is having fun racing hard every lap.

“The racing on the oval is just so much fun.,” he added. “The fact you come through the field and you’re just racing everybody. It doesn’t matter if it’s a lead-lap car or 3-lap down car, it’s all just so close. Even taking the air off people in the sidedraft – that’s something I’m still trying to figure out how the heck that even works.

“That’s something that we just don’t have. I’m just having so much fun. These cars are so much fun to drive. In IndyCar, you have to be so tense and so perfect every single lap, it’s so hard to take a breather and enjoy the moment. I can enjoy all 200 laps here. That’s a huge plus for me.”

Homestead marked just the 14th career NASCAR Xfinity Series race for Sam Hunt Racing. Ferrucci delivered the team their second-best finish only beaten by an eighth-place finish by Brandon Gdovic in the season-opener at Daytona.

Hunt, a former driver himself said Saturday’s performance was a testament to what Ferrucci is capable of.

“He’s competitive. He’s a big personality but he really does care. He works for it and you know by the end of tonight we’ll have a two-page brief on what he can do better, what the team can do better.

“I think he understands his opportunities are limited and he has to make the most of every race even if on paper he’s not ready. I think today was a good testament to what he can do and what we can do.” 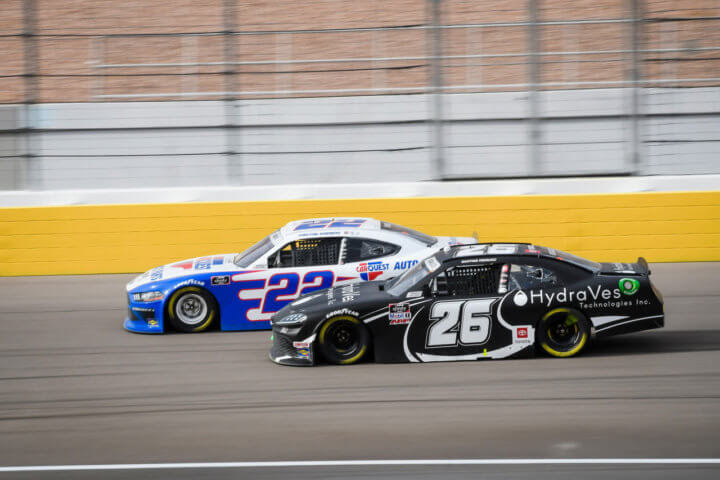 Looking ahead to Phoenix, Ferrucci didn’t have an opportunity to compete there in an IndyCar but says Toyota has allowed him a lot of SIM time to prepare for his debut at the 1.0-mile oval.

“I don’t have any experience at Phoenix except sim time,” he explained. “Toyota has been super great to us. They have allowed me to jump on the sim and get a couple hours on every track before we show up and go.

“It also gives us the chance to set up a cars a little bit and come off the trailer a little bit quicker. Phoenix is one of the tracks I’m looking forward to the most because I enjoyed it the most on the sim.”

Hunt believes it’s realistic for Ferrucci to continue to deliver top-15 finishes at his upcoming races at Phoenix, Atlanta and Martinsville.

“Today, what stuck out was late in the runs, his speed was just so good. When the tires fall off, he can really go to work. Top 15s and keeping the race cars together and learning every time he goes out.”