The season has opened with back-to-back first-time winners in Michael McDowell and Christopher Bell, meaning there are just 14 positions remaining in the Field of 16, with two teams that didn’t qualify last year already punching their ticket.

Of course, back then the No. 20 car was driven by Erik Jones, who has since moved onto Richard Petty Motorsports. Jones had previously taken the Joe Gibbs Racing No. 20 team to the playoffs in 2018 and 2019.

This is the second time the No. 34 Front Row Motorsports team has won a race to earn a playoff berth following Chris Buescher’s rain shortened victory at Pocono in 2016.

Perhaps Bell will remain a contender in his second full-time season and first at Joe Gibbs Racing. It’s certainly the eventual expectation, but it wasn’t a given that the No. 20 and No. 34 teams would be locked into the playoffs.

This matters two races in because the potential to make the field on points becomes all the more difficult as underdog teams begin to win their way into the 10-race elimination showdown. That’s increasingly likely with six more road course and two superspeedway races remaining on the regular season schedule. 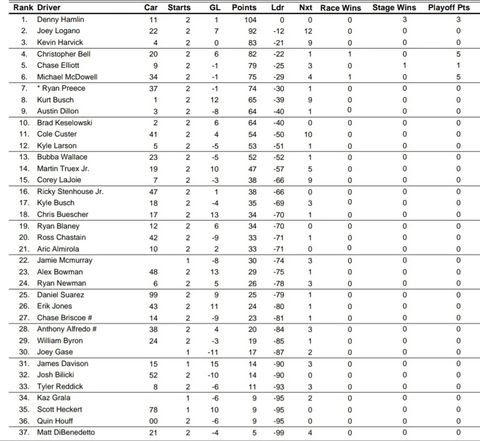 “The dynamic has changed dramatically right now,” Brad Keselowski said. “We’re very early in the season, and it’s now turned into a points race for those last few spots. Hopefully, it doesn’t matter for us.

“I think that we’ll be able to go to Richmond and Martinsville and some of those tracks and contend for the win and hopefully bring home wins, but if you don’t win, you’re in a lot of trouble right now because it’s not looking like you’re going to be able to get in the playoffs right now without a win.”

Every year, it seems as if there are one or two expected contenders that just struggle to break into the top-10 consistently enough to earn an easy playoff berth. After making the playoffs every year since the format was instituted in 2004, Jimmie Johnson missed the field in his final two seasons.

Austin Dillon and Cole Custer upset the field in 2020 with victories at Texas and Kentucky and qualified for the playoffs despite finishing 18th and 25th in the regular season standings.

That meant drivers without wins needed to crack 14th in the championship standings with Bell, Johnson, Jones and Tyler Reddick amongst those missing the cut.

Denny Hamlin is currently the championship leader and has averaged five wins a year over the past five years but agreed the fringe playoff contenders should start counting their points.

“I think (McDowell) certainly is a surprise,” Hamlin said. “He’s going to be in the playoffs. (Bell), I guess 95 percent of the people who know anything about the sport would probably put the 20 car in the playoffs one way, shape, or form anyways. I don’t think that’s really taking a spot that wasn’t already probably pegged.”

But you could have said that about Johnson last year, too.

The biggest surprise through two races is actually Ryan Preece. The No. 37 JTG Daugherty Racng team is seventh with two top-10s to open his season. He has also scored stage points in the Duel and Daytona 500 to give himself a 37 point cushion over the provisional cutline.

The No. 37 team entered the season without ownership charter protections, meaning they are at risk of missing any race where time trials don’t take place. Their fast start ensures them a guaranteed starting spot through at least the March 28 event on the dirt at Bristol Motor Speedway.

“I’m proud of what this team has accomplished over the past 10 race weekends,” Preece told Auto Week on Monday morning. “Many will look at the past two weeks, but we’ve put together four top-10s. We’re just executing as a team and it’s coming together.”