DAYTONA BEACH, Fla. (Feb. 9, 2021) – Two-time NASCAR Cup Series champion Kyle Busch may carry the nickname “Rowdy” but it was a couple of his competitors acting that way that allowed him to move into the lead out of the final turn and earn his second career Busch Clash victory Tuesday night.

Busch’s No. 18 Joe Gibbs Racing Toyota led only the length of a football field en route to the checkered flag – the only time he was out front all night at the exciting 14-turn Daytona International Speedway Road Course. But it was enough – earning the former champion his first victory with new crew chief, Ben Beshore, in the annual non-points exhibition that kicks off Daytona Speedweeks Presented by AdventHealth.

Race runner-up Chase Elliott had been fighting with then-race leader Ryan Blaney for the lead as the cars went into the final sequence of turns – called the bus stop. They collided. Blaney’s pole-sitting No. 12 Ford hit the wall. Elliott was able to recover enough to head to the finish line but Busch had already gotten around them both to take a .765-second victory.

Joey Logano, Tyler Reddick and William Byron rounded out the top five. Denny Hamlin, who led a race best 21 of the 35 laps, finished sixth, unable to make his way back to the front after a late race pit stop. Alex Bowman, Erik Jones, Ricky Stenhouse Jr. and Matt DiBenedetto rounded out the top 10.

“I kinda felt like there was an interesting opportunity that was developing there,” Busch said of the Blaney-Elliott situation, adding “When that started happening I was hoping they would wreck long enough I could get up there and get by them and win the thing. It’s never over until it’s over in these kind of things.”

Both Elliott, who won the last four NASCAR Cup Series road course events, and Blaney spoke about “going for the win” on that final series of turns. They are close friends off track and said that won’t change despite the competitive run for Tuesday’s trophy.

They had a conversation on pit road after climbing out of their cars and then came to the infield media center at the same time as well for post-race interviews.

Blaney said he was surprised Elliott was able to even make the race as close as it was, considering Blaney’s Ford had fresher tires.

“I hate it happened too, it didn’t work out for either of us,” said Blaney, who started from the pole position and ultimately ended up 13th. “We were just racing hard and I had a little bit fresher tires there. We saved a set [of tires] and got back to second there. His car was really good, I had to use up a lot to get to him. I tried to protect and drove into that last corner really deep to make sure I didn’t get dive-bombed like that. But we just came together.”

“Of course he didn’t mean to wreck me, but I ended up wrecked,” Blaney said later, in the post-race media conference. “I told him if you’re going to make a move like that, at least win the race.”

Elliott, the reigning NASCAR Cup Series champion, was apologetic for the hard contact – especially because it cost them both a victory. But he said he would do it again to win a race.

“Neither one of us won, that’s the big one,” Elliott said. “I was close enough to drive it in there. I feel like I’d be mad at myself for not at least trying. Obviously, I don’t mean to wreck anybody, especially him – some guys I wouldn’t mind, but he’s not one of them. Hopefully he’s not too mad at me. I feel like you have to go for it in an event like this.

“I can’t be sorry about going for the win, but certainly didn’t mean to wreck him.”

Speedweeks continues Tuesday evening with DAYTONA 500 Qualifying Presented By Kroger at 7:00 p.m., which can be seen on FS1 and heard on MRN and SiriusXM NASCAR Radio Channel 90. Tickets for Speedweeks Presented By AdventHealth events, excluding the DAYTONA 500, are still available as children 12 and under are FREE in the 100 level seating and $10 in all other reserved seating. Tickets start at $49 for adults for Thursday’s Bluegreen Vacations Duel At DAYTONA, Friday’s Nextera Energy 250 and Saturday’s doubleheader featuring the Beef. It’s What’s For Dinner. ® 300 for the NASCAR Xfinity Series and the Lucas Oil 200 Driven by General Tire for the ARCA Menards Series.

For information and a complete schedule of all racing events as part of Speedweeks, log onto http://www.DAYTONA500.com or call 1-800-PITSHOP. Tickets are also available for the track’s tripleheader weekend on the DAYTONA Road course (Feb. 19-21), featuring NASCAR’s top three national series. 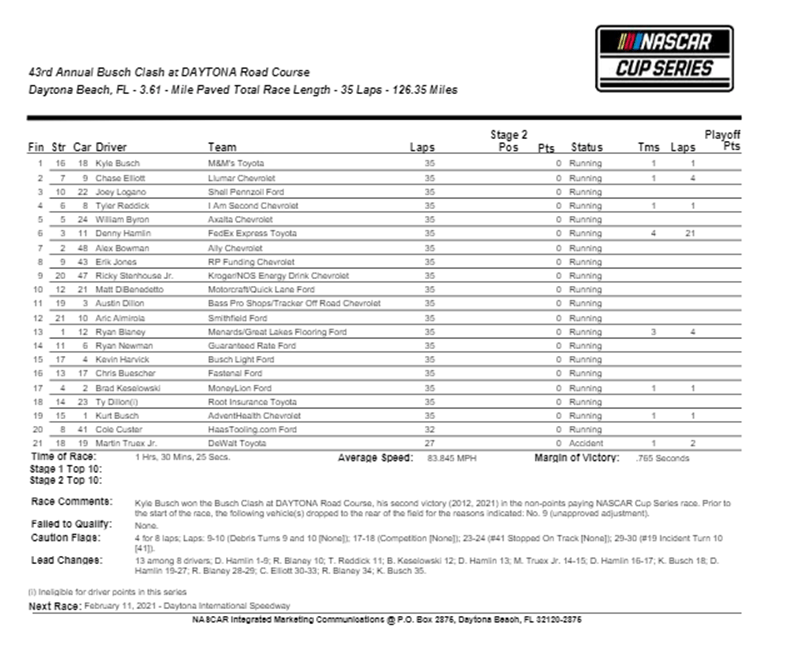