OH SO CLOSE: In 2017, Larson led the field with one lap to go in the DAYTONA 500. However, his Chevrolet ran out of fuel on the final lap and he coasted to a 12th-place finish. In 13 starts at the 2.5-mile track, Larson has four top-10 finishes, including a 10th-place result in last year’s DAYTONA 500.

HOT START: In 2020, Larson scored three top-10 finishes through the first four races of the season prior to the schedule being paused due to the COVID-19 pandemic. Only Kevin Harvick, who finished in the top 10 in all four races, had more. 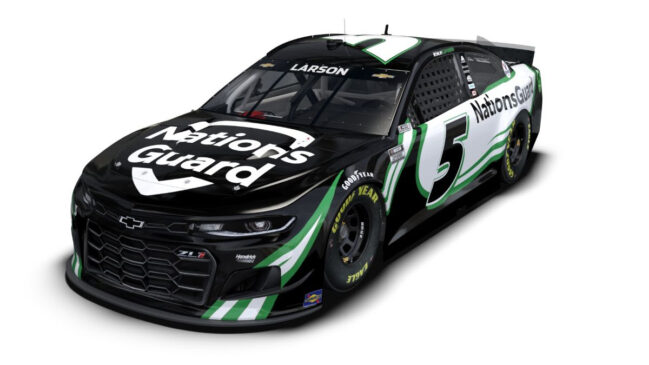 A RETURN: The 28-year-old Larson will pilot the No. 5 NationsGuard Chevrolet Camaro ZL1 1LE in the season-opening DAYTONA 500, marking the return of the organization’s flagship car number. The No. 5 entry has 45 wins in NASCAR’s premier series with Hendrick Motorsports collecting 38 of those checkered flags. Larson will be the 10th driver to field the number for the organization and will look to be the seventh to record a Cup win behind the wheel. It was most recently fielded by Hendrick Motorsports in 2017.

ON GUARD: NationsGuard, a program that gives car dealers control of their F&I products and customer experience, will adorn the No. 5 Chevrolet during “The Great American Race” at Daytona International Speedway on Feb. 14. It will also appear as the primary sponsor on the car at the DAYTONA Road Course on Feb. 21 and at Homestead-Miami Speedway on Feb. 28. For more information about NationsGuard, visit NationsGuard.com.

TWO-FOR-TWO: In January, Larson collected his second consecutive Chili Bowl Nationals victory, an annual dirt track event held in Tulsa, Oklahoma. He followed it with a win in a late model dirt car at All-Tech Raceway in only his second start of the new year. In 2020, Larson had one of the most successful years in the history of dirt track racing, winning 46 total events across various series.

BACKING THE 5: On Tuesday, Feb. 2, it was announced that Cincinnati Inc. and Freightliner have joined Larson and the No. 5 Chevrolet Camaro ZL1 1LE team as primary sponsors beginning in 2021. Read more about it here.