DEFENDING CHAMP: Last year proved to be one for the record book for Chase Elliott and the No. 9 NAPA AUTO PARTS team. In 2020, the emerging star won a personal best five races, including the season finale at Phoenix Raceway where he out-dueled three of the best drivers in stock-car racing to become the third-youngest champion in NASCAR Cup Series history. Elliott also scored career highs in top-five finishes (15), top-10s (22) and laps led (1,247). In addition, his banner season included a thrilling victory in the NASCAR All-Star Race at Bristol Motor Speedway, where he picked up a $1 million bonus.

WHAT OFFSEASON?: While many filled the offseason with rest and relaxation, Elliott kicked his competitive spirit into high gear. The 25-year-old driver laid down laps behind the wheel of different race cars in three different series: a late model in the Snowball Derby, midget dirt car at the Chili Bowl Nationals and sports car in the Rolex 24 at DAYTONA. He finished third in the Snowball Derby at Five Flags Speedway, seventh in the Chili Bowl F-Main, and most recently sixth in the DPi class and eighth overall in the Rolex 24. Along with Mike Conway, Pipo Derani and Felipe Nasr, Elliott spent more than five hours on the track and helped rally the No. 31 Action Express Cadillac after a broken gear lost the team 22 laps with five hours left in the race.

SPEED STREAK: Elliott has seen his share of success during Speedweeks at Daytona International Speedway. In 2016, he won the NASCAR Xfinity Series season opener, followed in 2017 by his first career Duel qualifying race victory and a second consecutive Duel win in 2018. In addition to those victories, Elliott was in position to win the 2017 DAYTONA 500 before running out of fuel from the lead on Lap 198 of 200.

POLE WINNER: Crew chief Alan Gustafson won consecutive DAYTONA 500 pole awards in 2015 with four-time NASCAR Cup Series champion Jeff Gordon, in 2016 with then-rookie Elliott, and again with Elliott in 2017. He is tied with NASCAR Hall of Famer Waddell Wilson and Elliott’s uncle, Ernie Elliott, for the most DAYTONA 500 pole wins in a row by a crew chief. Wilson earned three straight with drivers Buddy Baker, Bobby Allison and Benny Parsons from 1980-1982. Ernie Elliott accomplished the feat with Chase’s father, Bill Elliott, from 1985-1987.

ELITE COMPANY: On Valentine’s Day, Elliott could become the fifth NASCAR Cup Series champion to hoist the Harley J. Earl trophy in the following season. Dale Jarrett (2000), Gordon (1999), Cale Yarborough (1977) and Richard Petty (1973) are the only four champions who started the following season with the DAYTONA 500 victory.

WORK FROM HOME: For Daytona Speedweeks, defending NASCAR Cup Series champion crew chief Gustafson will make his annual return home to the “Birthplace of Speed.” He hails from Ormond Beach, Florida, just down the road from Daytona International Speedway. After graduating from Seabreeze High School, Gustafson enrolled at Embry-Riddle Aeronautical University to study mechanical engineering. He returns to Daytona for his 17th full-time season as a crew chief and his sixth year with Elliott.

GUSTAFSON AT DIS: In 2020, Gustafson notched his first home track points win at the inaugural DAYTONA Road Course event. In addition, he has collected two Duel qualifying race victories (2017, 2018) with Elliott. The 45-year-old crew chief has three runner-up finishes on the 2.5-mile Daytona oval: two with driver Kyle Busch (2006 and 2007) and one with Elliott last August. The 2007 margin of victory between Busch and winner Jamie McMurray was the closest ever in the summer race at DIS (0.005 seconds). Gustafson has also won the pole award at Daytona five times with three drivers (Elliott, 3; Gordon, 1; Mark Martin, 1). He is tied with Wilson and Leonard Wood for the most DAYTONA 500 pole awards for a crew chief with four. 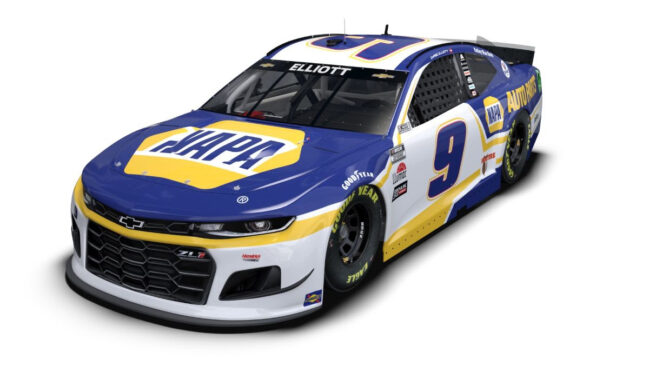 NAPA RETURNS FOR 500: For the sixth consecutive year, NAPA AUTO PARTS will kick off the 2021 NASCAR Cup Series season on the hood of Elliott’s No. 9 Chevrolet Camaro ZL1 1LE for the DAYTONA 500. Elliott has never started the “The Great American Race” without primary sponsorship from the Atlanta-based company.

WELCOME TO THE TEAM: In December, Hendrick Motorsports announced Eastman Performance Films LLC, a subsidiary of Eastman Chemical Company (NYSE: EMN), would become a primary sponsor of 2020 NASCAR Cup Series champion Elliott and the No. 9 team after extending its relationship for three more years. The sponsorship, which features the LLumar® brand of window film and paint protection film, will serve as a primary sponsor at the Clash at DAYTONA and the inaugural Cup Series event at Circuit of the Americas. Click here to check out the paint scheme.