NEW NUMBER, SAME TEAM: Alex Bowman will have a new car number and a new primary sponsor beginning in 2021. In October, Hendrick Motorsports announced the move of Bowman and crew chief Greg Ives to the storied No. 48 Chevrolet with full-season support from Ally. Bowman will continue working with his playoff-contending road crew and pit crew from the 2020 season, including veteran car chief Austin Konetski. The 2021 No. 48 Chevrolet Camaro ZL1 1LE has a fun, retro feel that was designed collaboratively between Ally, Bowman, Ives and Sean Cain of Blackbeard Designs. The seafoam, grapefruit and plum colors give the car a fun, retro feel. Check it out by clicking here. 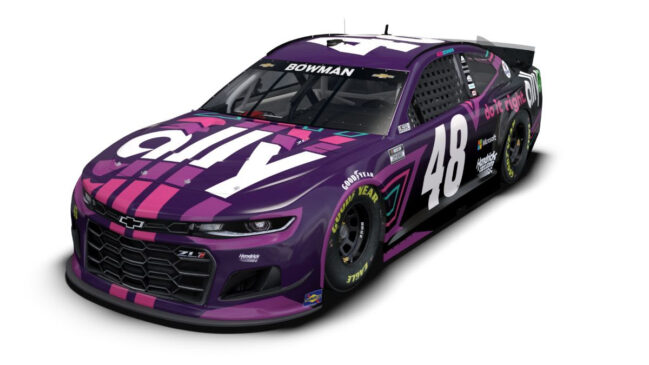 THE CLASH: On Tuesday night, the 27-year-old Bowman will make his fourth career start in the non-points Clash at DAYTONA. In 2017, the driver finished third in his first-ever Clash race, which he qualified for after capturing the pole position at Phoenix Raceway in 2016. In 2019, he started the event fifth and led 11 laps en route to a fifth-place finish. Last season, Bowman started eighth in the Clash and finished 15th after getting caught in a wreck on Lap 74. This year, the Clash will take place on the DAYTONA Road Course, where he finished 12th in the inaugural event last season.

FRONT ROW SUCCESS: In his three DAYTONA 500 qualifying efforts with Hendrick Motorsports, Bowman has sat on the front row each season. The Tucson, Arizona, native captured the pole position for the 60th running of the prestigious race in 2018 and qualified second both in 2019 and 2020. Bowman’s average start in the DAYTONA 500 for the last three years is a remarkable 1.7.

DUELING AT DAYTONA: Bowman will make his sixth start in the Duel qualifying races on Thursday, Feb. 11. The driver of the Ally machine ran the event in 2014, 2015, 2018, 2019 and 2020. Last season, he started from the lead in the second Duel after qualifying on the outside pole for the DAYTONA 500. He kept his Camaro ZL1 1LE clean and finished 15th after 60 laps.

IVES’ PLATE TRACK SUCCESS: Two of Ives’ five points-paying Cup wins have come at plate tracks. In 2015, the No. 48 team crew chief visited victory lane three times with driver Dale Earnhardt Jr., including at the Daytona oval and Talladega Superspeedway. Ives won a Duel at Daytona in both 2015 and 2016 with Earnhardt and has three plate-track pole awards, including two at Daytona. In addition, Ives called the shots for Regan Smith in the 2013 NASCAR Xfinity Series and led the driver to a win at Talladega. From 2006-2012, Ives was a race engineer on the No. 48 Chevrolet for Hendrick Motorsports. During that time, he was part of one win (2006), one pole award (2008) and one runner-up finish (2009) at Daytona International Speedway with driver Jimmie Johnson.

BUILDING ON ’20: In his third full-time season with Hendrick Motorsports in 2020, Bowman had his most successful year to date. He led 440 laps in 36 events, which marked a career best. He captured his second NASCAR Cup Series win after leading 110 laps at Auto Club Speedway, and the team recorded six top-five results and 15 top-10s. In the final 12 events of 2020, Bowman captured nine top-10 finishes, which was the most of all drivers in the series. He secured his third playoff berth and advanced to the Round of 8. The driver finished a career-best sixth in the 2020 NASCAR Cup Series standings.

PRESEASON WINNING: On Jan. 26, the Hendrick Motorsports pit crew athletes representing each team competed in a preseason scrimmage in preparation for Daytona. The scrimmage was valuable practice for the over-the-wall crew and the team members who play crucial roles behind pit wall during a stop. The No. 48 pit crew is comprised of tire changers Scott Brzozowski and Devin DelRicco, tire carrier Allen Stallings, jackman and tire carrier Dustin Lineback, and fueler Jacob Conley. At the conclusion of the 2021 scrimmage, the No. 48 team earned the win with the overall best performance.

GONE BUT NOT FORGOTTEN: In 2020, the former No. 88 team lost some of its valued members. On Aug. 19, aerodynamics engineer Bryce Whitson Jr. passed away after a three-year battle with Acute Myeloid Leukemia. When the COVID-19 pandemic paused the NASCAR season and the series participated in iRacing events, Whitson helped Bowman and Ives. On Nov. 24, just three days after getting married, tire carrier Rowdy Harrell and wife Blakley were tragically killed in a head-on collision while on their honeymoon in the Florida Keys. Harrell was a stand-out performer for Hendrick Motorsports for the last eight seasons. Before joining the organization, he won three national championships as a walk-on middle linebacker for the University of Alabama football team. Throughout 2021, the No. 48 Chevrolet will carry a special decal in remembrance of Whitson and the Harrells.