Hundreds of drivers from different racing disciplines will descend upon the state of Florida during Speedweeks next month.  Defending World Series of Asphalt Stock Car Racing champion Derek Griffith just might be the busiest driver out of all of them. 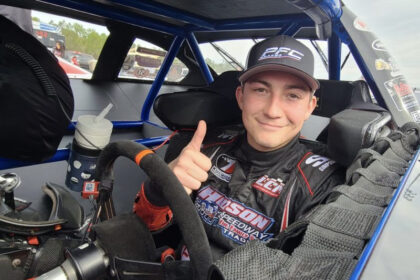 The Hudson, New Hampshire native will be back at New Smyrna to compete in a full week at the World Series in the Super Late Model, while also taking part in the ARCA Menards Series season opener just up the road at Daytona International Speedway.

While he will be able to contest most of the week without conflict, the final night of the World Series will be different.  The ARCA event at Daytona is set to go green at 1:30 ET on Saturday, February 13.  That puts it on the same night as the World Series finale and the biggest Super Late Model race of the week, the Orange Blossom 100.

“It could go either way; I do know Saturday’s Orange Blossom race is going to be in direct conflict with the ARCA race over at Daytona.  I might be able to shoot over there after the ARCA race and make something happen, it’s a 50/50,” Griffith told Speed51’s “The Bullring.”  “If I have to start at the tail of the Orange Blossom to hold on to a title, then I’m totally going to do it.  If I can’t, then I can’t.  I’ll figure out whether I can do that or not and I won’t lose too much sleep.”

After competing in eight ARCA events for Chad Bryant Racing in 2020, he moves over to Venturini Motorsports for two races this year, including the season opener at Daytona.  Griffith took to a Superspeedway for the first time over the weekend in ARCA’s preseason open test.

Two days following the test, Griffith was still left in awe of the historic 2.5-mile facility.

“It was unreal even just to pull in through the tunnel and see everything and really take it all in and be a part of it.  To sit in the car and roll off pit road and get going, I’ll never forget it.  It’s going to be a pretty wild race on February 13.  We started off so small and now we’re at Daytona, it’s pretty cool for me.”

He takes a different approach to learning new tracks compared to other competitors, preferring to use a more traditional approach to new facilities.

“I just have to go out there and figure it out.  I know people like sim racing, a lot of people take a lot of notes and have people help them out with lines.  The only way that really helps me in the sense that it works for me is I have to drive it and go out there and figure it out.  At a place like Daytona there doesn’t seem to be a lot of driving line and changes in that sense, there a lot of tips and tricks you can pick up in the draft, that’s something I’ll have to pick people’s brains about.”

Fans in the Northeast will be able to see Griffith quite often during the 2021 season across PASS North and the Granite State Pro Stock Series.  Both touring series’ have ambitious schedules for the new year, which has him excited for Super Late Model racing in the region as a whole.

“We don’t necessarily have plans, per se.  We have the Pro All Stars Series up here and Granite State Pro Stock Series, and they’ve got some killer schedules this year.  They’re bouncing around to some racetracks they haven’t been to in a long time.

Aside from Daytona, Griffith has just one other ARCA start planned with Venturini to this point.  That race will come at Kansas Speedway, the site he earned a career-best third at to end last season.  With the addition of sponsor SpotOn, adding races to the schedule is not out of the question.

“There’s always possibilities.  We got a new sponsor, new to the racing world really.  It’s pretty cool to be introducing another sponsor to the racing world.  If we can get them noticed, then they’re definitely ready to do some more races.  They’re getting their feet wet with Daytona and Kansas.”

Even with harsh winters being the norm, racing season in the Northeast isn’t just exclusively during the summertime.  Many tracks in the region will hold Enduro races over the winter, with the events often held on surfaces covered with snow. 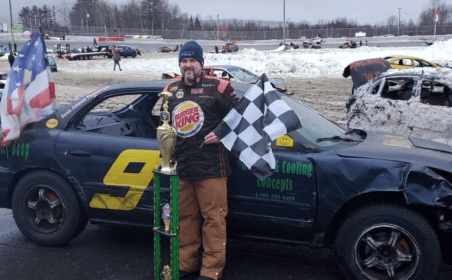 One of the bigger events took place over the weekend, with 130 cars making the trip to Riverside Speedway (NH) for the annual Winter Blast 100.  Maine racer Jamie Heath emerged from the field that saw triple-digit entries to score the win at the quarter-mile.

For Heath, it has become one of his favorite races to take part in over the years.

“We look forward to it every year.  It was pretty neat to think they had 130 cars and we were able to finish,” Heath told Speed51.  “I don’t know, it’s very different.  You have to be patient, there’s a lot of people out there who aren’t patient.   It takes a lot of patience.”

The Winter Blast 100 is a race that embodies “to finish first, you first must finish.”  The snow and the large amount of entries throw wrenches not seen in other forms of racing into the event.

One thing that will help drivers in the Winter Blast 100 is a starting spot towards the front.  Heath was helped out in that regard Saturday afternoon, who started 14th after several years of starting mid-pack.

“Take it easy until the end because if you’re not there at the end then you can’t really go.  We always take it easy and ride for a while and once they weed out half the cars we start racing.  We started 14th and it was the best starting spot we’ve ever had, normally we’re like 45th.  It was neat to get up front and stay up front for a while.”

The accomplished 4-Cylinder racer is no stranger to big-time wins at the Groveton, NH facility.  He won the precursor to the Winter Blast 100, the Pre-Hangover 150, in 2011 and has also won the marquee 4-Cylinder race held at the track.

Heath considers Saturday’s Winter Blast win one of his biggest wins of his racing career.

“We’ve won this one before, I’ve got a couple seconds and a win.  We’ve won up there before in a 4-Cylinder in the Jake McDowell 100 and that was probably one of my biggest wins.  This one was right up there.”

As the 2021 regular season sits a few months away, Heath is making a big jump for the new year.  He will return to Riverside weekly, but will be doing so in a Late Model.