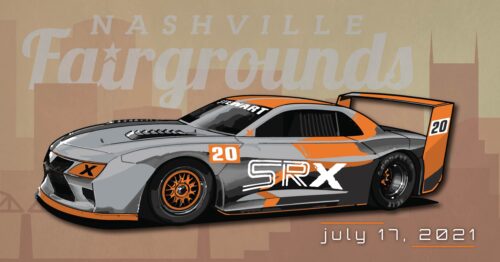 “We are proud to unveil another national event for our race fans in Nashville,” says President of Track Enterprises, Bob Sargent. “The SRX and Masters of the Pros event is another step in our progressive plan to bring more nationally recognized events to Nashville Fairgrounds Speedway,” Sargent explained.

SRX is a six-race series on Saturday nights beginning in Stafford, Connecticut on June 12th and concluding in Nashville, Tennessee on July 17th, with prime-time television coverage on the CBS Television Network. The SRX Racing Series will feature drivers from a variety of racing backgrounds with a total emphasis on head-to-head competition in short, sprint races. Races will have no pit stops but break where drivers and crew chiefs can make adjustments and strategy decisions. SRX has secured driver commitments from some of the sport’s biggest names, including Tony Stewart, Bill Elliott, Tony Kannan, Paul Tracy, Bobby Labonte, Willy T. Ribbs, Mark Webber, Ernie Francis, Jr. and Helio Castroneves.

SRX Co-Founder Ray Evernham recognizes Nashville Fairgrounds Speedway as a premier venue to host the inaugural season finale. “We wrap up the 2021 series with our championship at the Nashville Fairgrounds, at a track that has witnessed so much history over the course of their 100+ year existence,” said Evernham.

“Our goal in crafting the inaugural SRX schedule was to feature tracks that are challenging, unique and have a strong motorsports history. This six-race series does just that,” said Tony Stewart, SRX driver and co-founder. “Four renown pavement tracks in Stafford, Lucas Oil Raceway, Slinger and the Nashville Fairgrounds and the two most prestigious dirt tracks in the country – Eldora and Knoxville. All demand respect and each forces drivers to adapt. What works at one track won’t necessarily transfer to another.”

“These venues have seen some of the best racers in the country, but this will be the first time drivers from so many different disciplines will be racing on these historic tracks all at the same time. We’re proud to deliver another exceptional event to each of these tracks’ already rich histories,” said Stewart.

Previously announced at Nashville Fairgrounds Speedway – The ARCA Menards Series East returns on Saturday, May 8th and the 37th Running of the All American 400 Race Weekend is set for October 28th through 31st. Now, the Superstar Racing Experience is scheduled to crown their inaugural series champion at the historic Fairgrounds Nashville on Saturday, July 17, 2021.

July 17th is already a big day for the Speedway as the evening also features the 9th Running of the JEGS/CRA All-Stars Tour Masters of the Pros 150. The Masters of the Pros is one of the highest paying Pro Late Model races in the country at $10,000 plus to win, attracting the best late model drivers in the nation. Former race winners include Monster Energy NASCAR Cup Series Champion Chase Elliott, John Hunter Nemechek, Bubba Pollard, Cole Williams, and Matt Craig. Last year’s race, won by Craig, saw over 40 entries for the 150-lap contest. More details about the 2021 race will be announced in the coming weeks.