After dropping to the rear of the field, you wondered if Chase Elliott had what it would take to overcome that setback and contend for the title. That thought didn’t last long as he quickly raced his way through the field and was third at the end of Stage One. He barely lost Stage Two to Brad Keselowski.

After that, it was on. He outraced both Keselowski (P2) and Joey Logano (P3) to spank the field by 3 seconds as he raced his way to the checkers and his first Cup title. 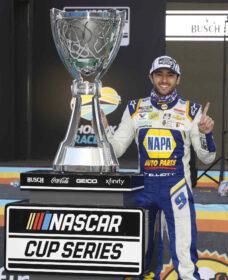 Not only did he outduel the two Penske teammates, and former champions, but he made Denny Hamlin irrelevant. Hamlin didn’t even lead a single lap on his way to a P4 finish. In fact, the entire Gibbs operation became irrelevant for the title after Talladega.

In his final race of his NASCAR Cup career, Jimmie Johnson ended the day P5. Seven-time is now semi-retired even though he will still race here and there but his days of 36 races a year are over. Good luck Jimmie and thanks for the memories.

Ryan Blaney ended the day P6 in another strong finish after being eliminated from contention earlier. Kevin Harvick (P7) wasn’t a threat to win at all which tells you just how difficult it is to stay strong all year long. The lack of consistency at the end of the season where he was one of the most dominant drivers spelled doom for the team and paved the way for Elliott to step up to the plate.

Matt DiBenedetto (P8) ended his season on a strong note, proving his worth to the Wood Brothers and whomever might be eying him for 2022. Rounding out the Top 10 were William Byron (P9) and Martin Truex, Jr. (P10).

Going out without the bang he was hoping for, Clint Bowyer (P14) is also retiring and will move to the broadcast booth. I hope he doesn’t get “network neutered” because he is one of the best quotes in the business.

When you look back on the 2020 season, it is stunning that we even saw a finish like this and all 36 races completed. If you think back to March, Denny Hamlin had won the Daytona 500 and Joey Logano had two wins out of the first five races. Then it all came to a screeching halt as the pandemic blazed across the globe and our lives came to a screeching halt.

After a two month pause, NASCAR started out cautiously yet ambitiously. Midweek races, Saturday night races, multiple races in a week, double headers – all with no fans to start with and then gradually letting fans return later in the season. And in all of this, only two drivers tested positive for COVID. That us just amazing considering how many competitors have tested positive in other sports. NASCAR took the health of its fans and competitors seriously and it paid off.

2021 will be another test for NASCAR as the pandemic will most likely still be with us by the time the Daytona 500 rolls around again. Sadly, I expect more of the same as there may be thousands more dead between now and then and no vaccine yet nationally available to everyone. But I trust NASCAR and its tracks to do what is right and protect fans and teams in the best way they can.

In the meantime, enjoy the off-season. See you in 2021. Please stay safe, stay healthy, turn left and keep the shiny side up.