It was another fun-filled week of racing with the All Star race Wednesday night at Bristol and the Cup race at Texas. Chase Elliott won an entertaining but anticlimactic All Star race. Bristol proved it is an All Star caliber track that offered a different style of racing than Charlotte, as if there was really any doubt.

The under car light gimmick was interesting but didn’t really change the complexion of the race. Having just the rear of the car with underlight was a little odd looking. The lights showed up well on TV and I would like to hear from any fans that were in attendance how it looked on track from the stands. Elliott made a clean getaway at the end of the race without too much pressure to win his first ever All Star race.

The race at Texas sure turned out differently than what I think a lot of folks thought was going to happen. Aric Almirola had a pretty stout car but it was Ryan Blaney who won the first two Stages and led a race high 150 laps. Almirola got penalized for a “blend” infraction after pitting. Not something you hear of very often but it happened in the Xfinity race as well. Wonder who in race control decided Texas was the place for bringing that up. And rest assured, there are some rules regarding the blend into the racing lanes once you pit but it is a gray area. NASCAR loves the gray areas. Almirola recovered for a 10th place finish but you wonder what might have been.

Two significant events changed the outcome of that race. Battling Brad Keselowski for the lead at the beginning of Stage 3, Blaney washed up on the track causing everyone behind him to check up. That created some unwise 3 wide racing through the dogleg that then created a wreck when Kyle Busch, pickle in the middle, got tagged sending him into teammate Martin Truex, Jr. who went spinning in front of a whole mess of cars. You can imagine the rest. Busch shot through the infield grass and back onto the track with limited damage. Asked afterwards how he managed to do that and not suffer more damage, his reply was simply “KFB.” Ya gotta love that. WFO, KFB.

The second event was a rookie mistake by Quin Houff trying to pit. He turned down late in front of Matt DiBenedetto and Christopher Bell causing another caution that caught a lot of drivers a lap down during a pit sequence. 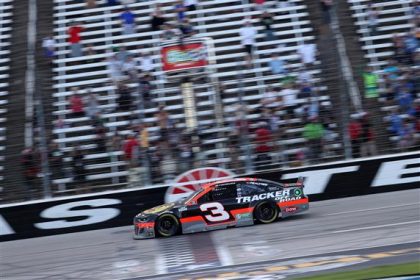 That put Austin Dillon and Tyler Reddick on the front row. They held off all contenders during two more restarts and Dillon puled just ahead of Reddick to win his first race of the season and give RCR a 1-2 finish. I have noted several times this season that Austin Dillon has been worth watching. His finishes have been better and he has been running much cleaner than he has in the past so it is not surprising to me to see him be able to take advantage of a situation and make the most of it.

Reddick has also been a shining star of this rookie class and it was good to see him hold on for second while being pressed by the likes of Joey Logano, Kyle Busch and Kevin Harvick at the end.

Brad Keselowski made some post-race comments I found a little interesting. In speaking about the Houff incident, he said that NASCAR should be able to send a driver back to the Xfinity or Gander series when they have not proven themselves worthy by virtue of the number on incidents they cause. I found that interesting because you can blame a lot of on track incidents on veteran drivers. I am sure Brad has a few detractors that think he should get some remedial driving course. NASCAR has a way for dealing bad driving. They will park the driver. And I don’t recall many rookies getting parked. While having a “merit scale” for staying in the series, I am not sure how that would work, Brad. Based on what, how many accidents you cause? Who determines what is a “racing incident” vs a lapse in judgement by either a driver or a spotter? I think there are a lot of veterans who may take offense at how someone else views their mistake. Be careful what you wish for, you might just get it.

And in case you missed it, the other Austin, Austin Cindric, was awarded the Xfinity race win after winner Kyle Busch was DQd for failing the post-race inspection. Kyle Busch also won the Gander truck race. KFB baby.

(photos courtesy of NASCAR Media, and used with permission)