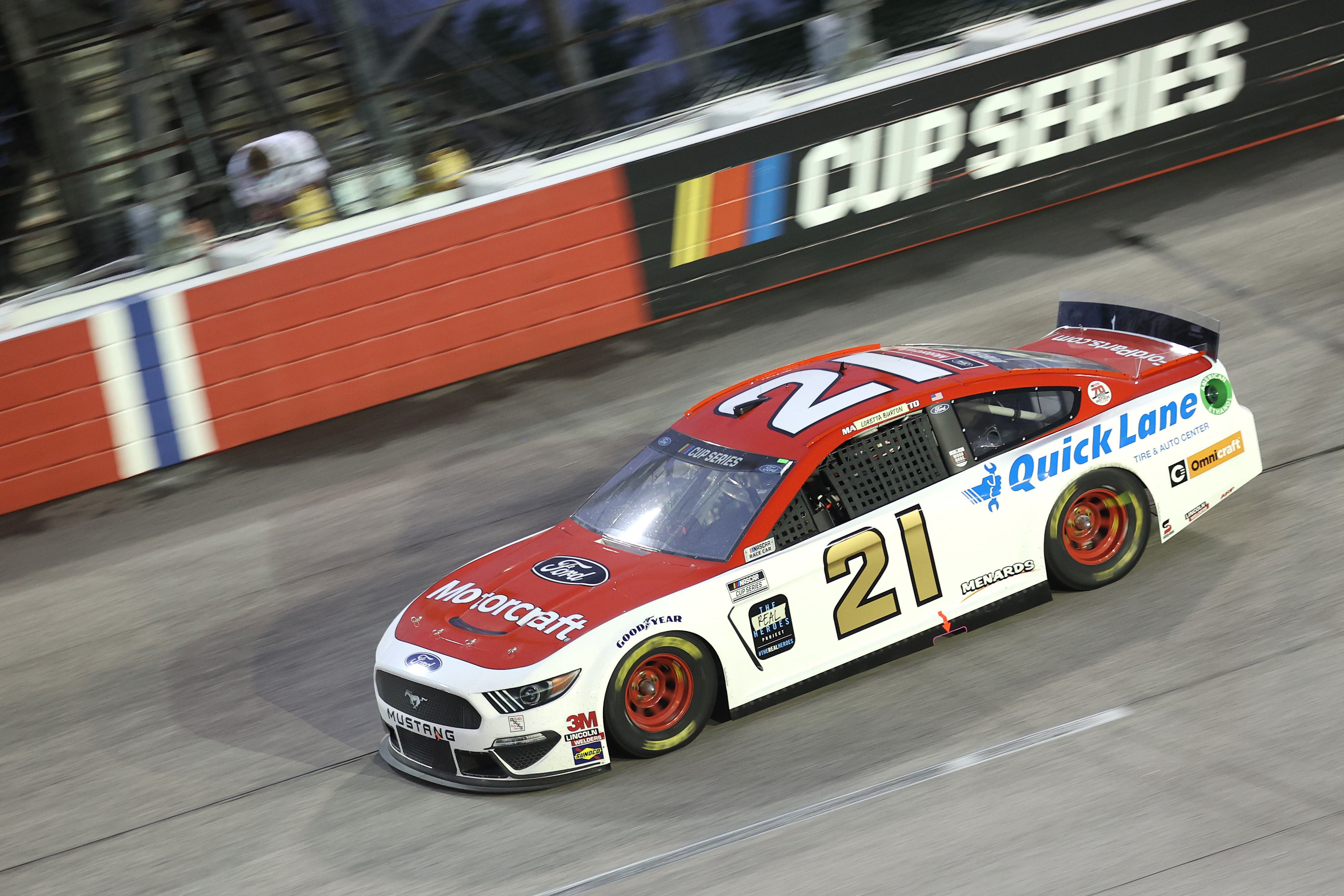 Despite struggling to find the speed he hoped to have at Darlington Raceway, Matt DiBenedetto came away from two races in four days with two solid finishes, including his second top-10 finish of the season, a ninth-place effort in Wednesday night’s 500-kilometer race at the Lady in Black.

DiBenedetto and his No. 21 Motorcraft/Quick Lane Mustang fired off fast in Wednesday’s race, the start of which was delayed by rain throughout the day.

He started seventh after the qualifying order was set through an inversion of the finishing order of Sunday’s Darlington race in which he finished 14th.

He had driven up to fifth place, but made an early pit stop because he and the team were worried that there might be an issue with his car.

The decision to pit cost DiBenedetto and the team track position and caused them to use up one of the eight sets of tires each team was allotted for the race.

“It was fun to fly through the field like that,” he said. “I was surprised how many cars I could just fly by.”

But as the track took on more rubber, the results weren’t as good.

“We were a lot better on the green track,” he said. “When the track rubbered up, we just weren’t where we needed to be.”

Still he was able to finish 10th in the second 60-lap stage, earning one stage point.

As the laps wound down, DiBenedetto and his team, led by crew chief Greg Erwin and spotter Doug Campbell, used strategy to move into the top 10 when it counted.

Sensing rains would arrive before the race reached the advertised distance, the decision was made to leave DiBenedetto on the track when the caution flag flew with 32 laps remaining.

DiBenedetto moved up to second for the restart and was hanging on to ninth place when the race was called for rain 20 laps shy of the planned 228 laps.

“We gambled at the end and got lucky, but we’ll take it,” he said of his second top-10 finish of the season, the first a runner-up run at Las Vegas Motor Speedway in the second race of the season. “All of the tracks except for Darlington we have had really good speed, so I know we will take a little luck from this one and moving forward we should be fast at a lot of places and be better at Charlotte.”

DiBenedetto and the team remain in ninth place in the Cup standings heading into this weekend’s Coca-Cola 600 at Charlotte Motor Speedway.
###

Motorcraft offers a complete line of replacement parts that are recommended by Ford Motor Company. From routine maintenance to underhood repairs, Motorcraft parts offer value with high quality and the right fit at competitive prices. Motorcraft parts are available nationwide at Ford and Lincoln Dealers, independent distributors and automotive parts retailers, and are backed by the Service Parts Limited Warranty of Ford Motor Company. For more information, visit www.motorcraft.com.

Omnicraft is part of the Ford lineup of parts brands: Ford Parts, Motorcraft and Omnicraft. Omnicraft is the exclusive non-Ford/Lincoln parts brand of premium aftermarket parts. With over a century of parts heritage to build upon, Omnicraft provides excellent quality and fit and is a preferred choice of professional automotive technicians. To find out more about Omnicraft, visitwww.omnicraftautoparts.com or contact your local Ford or Lincoln Dealership.
About Quick Lane Tire & Auto Center

Quick Lane Tire & Auto Center offers extraordinary service for routine vehicle maintenance including tire repair and replacement with a Low Tire Price Guarantee and a full menu of automotive services including oil and filter, brakes, alignments, batteries, and shocks and struts on all vehicle makes and models. Service is performed by certified technicians at more than 1,000 locations worldwide while you wait, and no appointment is necessary. For more information about Quick Lane, please visit www.quicklane.com.