Skip to content
You are here
Views: 103
Corey LaJoie will make his sixth NASCAR Cup Series start at Phoenix Raceway on Sunday when the series makes a stop in the Phoenix desert for the FanShield 500, concluding a three-race stretch out west.
When the NASCAR circuit returns to the one-mile track in November, it will be for the season finale, marking the first time that Phoenix Raceway will host the championship race. It has been held at Homestead-Miami Speedway since 2002.
This weekend, teams will utilize a reduced-downforce package announced in January by NASCAR designed to enhance competition on road courses and the shorter oval tracks on the NCS schedule.
Among the changes include significantly smaller spoilers, splitters and other aerodynamic devices in an effort to place a greater emphasis on handling and driver input with less stabilizing downforce on those tracks.The package should also allow for better opportunities for drivers to overtake one another on the shorter racetracks.
This package will also be in place at Bristol Motor Speedway, Dover International Speedway, Martinsville Speedway, New Hampshire Motor Speedway, Richmond Raceway, Charlotte Motor Speedway Roval, Sonoma Raceway and Watkins Glen International.
MotorTrend, a Discovery company, will sponsor driver Corey LaJoie and the No. 32 GoFas Racing team this weekend in Arizona.
The MotorTrend App offers nearly 8,000 episodes and roughly 4,000 hours of world-leading automotive series and specials including the all-new sports documentary series,”NASCAR ALL IN: Battle For Daytona.” 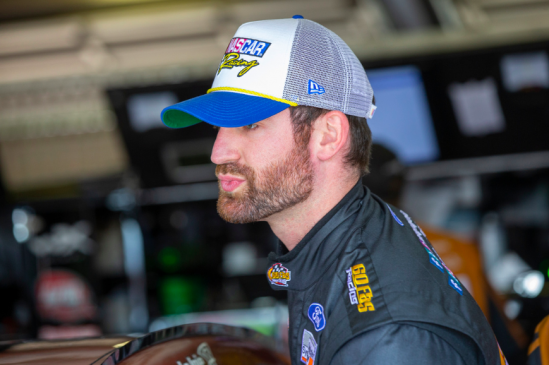 The show gives viewers a behind-the-scenes look as NCS drivers Corey LaJoie, Austin Dillon and Tyler Reddick prepare for the most anticipated stock-car race of the year, the Daytona 500.
The show, which is available to stream exclusively on the MotorTrend App, documents the commitments and sacrifices made by teams, drivers, and families to compete at NASCAR’s highest level.
Catch 312 miles of action on Sunday, March 8 at 3:30 p.m. on FOX.
LaJoie on the upcoming weekend:

“I think all of us drivers are excited to see what the low-downforce change brings to the racing at Phoenix Raceway. Phoenix is always a fun track to race at and I think we all believe this package will make the racing even better. We’re all excited to have MotorTrend on board this weekend as well. We’ve had a great time working with them over the last couple of months on the NASCAR ALL IN project and I think fans have really enjoyed seeing the behind-the-scenes footage at our team and RCR. Make sure you download the MotorTrend App and tune in!”

Corey LaJoie took the green flag for the 200-lap event in Fontana, California from the 26th position. Early in Stage One, LaJoie relayed to the Pala Casino team that the No. 32 Ford had a tight condition just before coming to pit road at lap 29 for four Goodyear Racing Eagles and Sunoco Racing Fuel as well as an adjustment to help loosen the Pala Casino Ford Mustang. Despite falling to 30th, LaJoie raced his way back to finish Stage One in the 26th position.

After clearing up radio issues under the caution, LaJoie radioed to crew chief Ryan Sparks that he needed a big swing of adjustments at the next pit stop in an effort to find more front-grip. After the scheduled stop, LaJoie was back on track in 29th contesting with a multitude of drivers for the free-pass position. The 28-year-old continued to battle tight conditions setting him up for even bigger adjustments at the next stop.
As the laps winded down, LaJoie maintained his running in 30th. The Pala Casino team serviced the No. 32 for the final time with 35 laps to go with a change of tires and fuel. By the checkered flag, LaJoie gained a position, finishing the 400-mile race 29th.
—————————————————————
About Our Team
About MotorTrend:
MotorTrend Group is the largest automotive media company in the world, bringing together Discovery’s fast-growing MotorTrend TV, formerly Velocity, and a vast automotive digital, direct-to-consumer, social, and live event portfolio, including MOTORTREND, HOT ROD, ROADKILL, AUTOMOBILE, and more than 20 other industry-leading brands. With a monthly audience of 26 million across web, TV, and print, and 110 million social followers, culminating in 2 billion monthly content views across all platforms, the company encompasses television’s #1 network for automotive superfans, a leading automotive YouTube Channel, and the MotorTrend App, the only auto-dedicated subscription video-on-demand service. MotorTrend serves to embrace, entertain, and empower the motoring world.
About Go Fas Racing:
Go Fas Racing (GFR) currently fields Ford Mustangs in the NASCAR Cup Series for driver Corey LaJoie. Located in Mooresville, North Carolina, GFR has competed in the NASCAR’s premier series since 2014; fielding cars for some of NASCAR’s top drivers, including past champions. To find out more information about our team please visit www.GoFasRacing.com.
Stay up-to-date on Corey LaJoie:
To get live updates during the race weekends follow @coreylajoie on Instagram and Twitter. Make sure to give Corey a “like” on Facebook – “@CoreyLaJoieRacing”. For a detailed bio and updated in-season statistics, please visit www.coreylajoieracing.com .