PONCE INLET, Fla — We thought we would hold a surprise for you until now, so I would like to share the fact that NASCAR Chairman and CEO Jim France will be in the ninth annual Historic North Turn Legends Beach/Road Course Parade on Saturday, February 8, 2020.

France has entered the 1950 Nash Ambassador that his father, Bill France co-drove with Curtis Turner in the first Mexican road race.

“This will be a special treat for me and a personal one. The parade represents our local racing heritage which my family has been involved in since 1936, when my father raced in the very first beach-road race.

“It’s going to be a step back in time for me. It’s also going to be a great experience”, France stated when turning in his official entry form, which is required for each entry. He will be joining two other members of the NASCAR/DIS organization, as NASCAR Vice-Chairman Mike Helton will be driving a ’53 Oldsmobile owned by Bill Blair and Daytona International Speedway President Chip Wile will drive a 1950 Oldsmobile owned by Griffin Motors.

A field of 70 cars and six motorcycles are expected, with possibly ten drivers who competed on this same course in the 50’s being behind the wheel of a car or riding in a car. Three of the cars entered in the parade actually competed on the beach in the 50’s. The ’37 #6A Ford that Chocolate Myers will be driving was driven on the beach in the 50’s by his father, the late Bobby Myers and the ’39 Ford #50, and owned by Bud Layton, was driven to victory in the 1950 modified-sportsman race by Gober Sosebee. Former Indianapolis 500 competitor, nine-time NASCAR Cup winner two-time USAC champion and four-time AMA champion, Paul Goldsmith, will drive a ’49 Oldsmobile, owned by Griffin Motors of Florence, S.C.

Goldsmith finished fifth in the 1958 modified-sportsman race on Saturday and returned Sunday and drove a Smokey Yunick 1958 Pontiac to victory and became the last winner of an automobile race on the beach.

Don’t be surprised to see the mechanical side of the famed Wood Brothers Racing Team behind the wheel of a 1954 Ford. In 1958, Glenn Wood sat on the pole in a ’54 Ford sportsman car, but was beaten at the finish line by Banjo Matthews and Jimmy Thompson who finished ahead of him in a pair of modified cars. Len Wood has built a tribute car of the one that his uncle drove, and the driver is expected to be Leonard Wood.

The Parade begins at 12:30p.m. and the staging area will be open for spectators at 9a.m. The staging area is located across the street at the Racing’s North Turn Restaurant, located at 4511 S. Atlantic Ave. Spectator parking is at 4200 S. Atlantic Ave in Wilbur By The Sea, Fla. and there will be free shuttle service from there to the South Turn (With stops along the way) starting at 10a.m. and runs continuously until 5p.m.

The parade is sponsored by Volusia County, the Town of Ponce Inlet and Racing’s North Turn Restaurant. 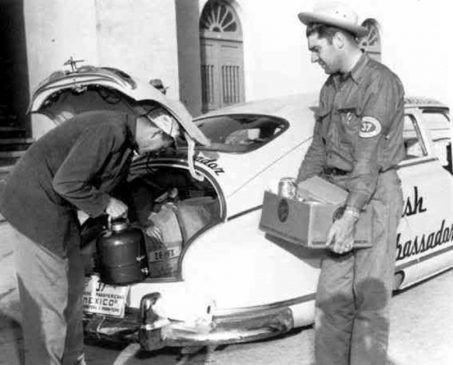 Bill France and Curtis Turner load supplies to be used along the way in the Mexican road race.