It was the late summer of 1985. Huey Lewis and the News topped the charts with “The Power of Love.” The epic sci-fi classic, “Back to the Future” was number one at the box office. Central Indiana weather was blazing hot. 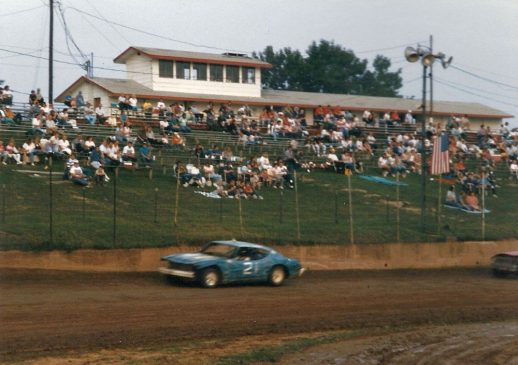 We had no money and we knew absolutely nothing about auto racing. Our team consisted of three people. My 46-year-old father, Nelson, my sister, Dory, and me. We had purchased a beat up 1968 Chevelle for $250 and took turns driving it in a few street stock races. None of us had ever driven a race car before and that’s really what makes this story so remarkable.

Our car had continual mechanical issues and we weren’t mechanics. The car overheated badly. We foolishly entered a regulation-compliant car at tracks that had no technical inspection and wondered why we got creamed. We were rarely fast enough to make the A Main. The few occasions that we did were cause for celebration even if we finished dead last. 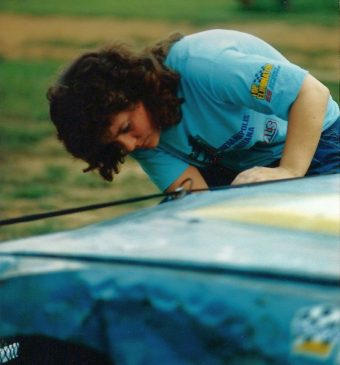 One August night we loaded up the race car and went to Lincoln Park Speedway in Puntamville, Indiana. It was Dad’s night to drive. The pits were packed with about 35 teams in our division. Lincoln Park drew big fields, but with some luck we hoped to make the B Main and get twenty bucks for starting. That would pay for gas on the way home.

Dad went out to qualify and drove brilliantly, somehow turning in the 16th fastest lap in the field. The sixteen fastest cars were guaranteed an automatic starting position. We were overjoyed. We didn’t have to transfer through a heat race or B Main. Dad had qualified us straight into the main event. It was an amazing performance beyond our wildest expectations. This alone made our night a success.

Of course, we knew he could not go the distance because the car would overheat. We didn’t anticipate actually making the 25-lap A Main. We figured we’d be lucky to run the 15-lap B Main. Oops. Now what?

So we made a plan. Dory and I grabbed a 2 ½ gallon hand pump pressurized garden sprayer and filled it with water. During caution flags Dad could pull over to the side of the track where we would spray the radiator to cool it down and wash out several pounds of Lincoln Park’s clay surface. Caution laps were not scored and the pit steward promised us that we would be able to rejoin the field in the same position after each impromptu pit stop. With some luck we might be able to finish the race.

The green flag fell for the Street Stock A Main at Indiana’s Lincoln Park Speedway in August 1985. Starting in Row 8, Dad passed two cars on the outside in Turn 2 in the opening laps. He was flying. Moments later, two of the top cars tangled and brought out a caution flag. As planned, Dad pulled to the side of the track near pit lane. Dory and I flew into action, raising the hood and spraying down the steaming radiator. The engine cooled down. Dad was waived back into position and rejoined the field in 12th place. We were stunned. Our plan actually worked.

Dad was fast enough to hold his position but was having a hard time moving forward. All of the leaders had equipped their cars with steering quickeners (illegally). We didn’t have one. Dad struggled to manhandle the car in every corner. Two cars ahead of him got together and spun out, bringing another caution. Dory and I repeated the process, cooling down the radiator yet again. Dad yelled to me through his helmet that the engine temperature would hold steady under green but get hot during caution periods. He rejoined the field in tenth place.

It is impossible to express what a victory this was for us. We were three novices who hadn’t a clue what they were doing, yet we had taken a 30th place car into the top ten of the A Main and were running competitively on the lead lap. Over two thirds of the starting field was behind us. Dad was super fast. This moment was the peak of his auto racing career.

Green flag racing resumed again. Dad was now closing in on 9th place with more than half of the 25-lap feature event in the books. Then a bad crash occurred at the back of the field, this time bringing out a red flag. Dad once again pulled up to the guardrail where Dory and I went to work cooling down the radiator. Only then did I notice that the radiator was falling out of the bottom of the car. One of the radiator mounts had broken and the entire radiator was about to drop through and hit the ground.

If this happened today, I would send him back out to take his chances. But back then we had just one radiator and twenty bucks in prize money wouldn’t buy a replacement. Today I would use heavy wire or zip ties to try and hold the radiator in position and finish the race. But we didn’t have much to work with. As novices, we didn’t know to bring these small but essential items to the track. We had no money, we knew nothing and had no one to teach us.

Working under pressure with just minutes to create a solution, we couldn’t find any way of securing the radiator and we couldn’t afford to lose it. After unsuccessfully trying several times to wedge the radiator mount back into position, the green flag came back out. We gave up and waived Dad back to the pit area and our night ended.

It’s still hard to say which was greater; the disappointment of not finishing or the thrill of actually being fast and running at the front of the A Main.

Of course, no one else will ever remember that night or know the full story, but for us, it remains a bittersweet memory. It was a great drive against overwhelming odds by a team that really had no business being there. But even today, at holidays or family gatherings, one of us will occasionally mention that night and we will enjoy reliving it all over again.

And that’s worth more than twenty bucks.

The Stephen Cox Blog is presented by “Porsche Legend: The Penske L&M Porsche That Made Racing History”

All photos supplied by Sopwith Motorsports