Click past the jump to see all the news and notes for the upcoming NASCAR race weekend at Bristol Motor Speedway! Views: 540

This one’s for the Wrangler and Tacomas out there: own one or know someone who does? ExtremeTerrain’s (XT) latest giveaway could award them a $5000 shopping spree! Views: 613

DAYTONA BEACH, Fla. (April 3, 2019) – NASCAR today announced the 2020 schedules for both the NASCAR Xfinity Series™ and NASCAR Gander Outdoors Truck Series™, and both include a return to race tracks that were part of the original schedule for each series – venues that have been absent from the respective slates for more than a decade. Views: 562 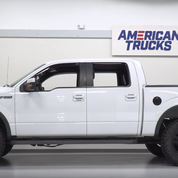 Do you own an F150, Silverado, Sierra, RAM or know someone that does? Well, here’s your chance to win it big at AmericanTrucks’ (AT) latest sweepstakes! Views: 628